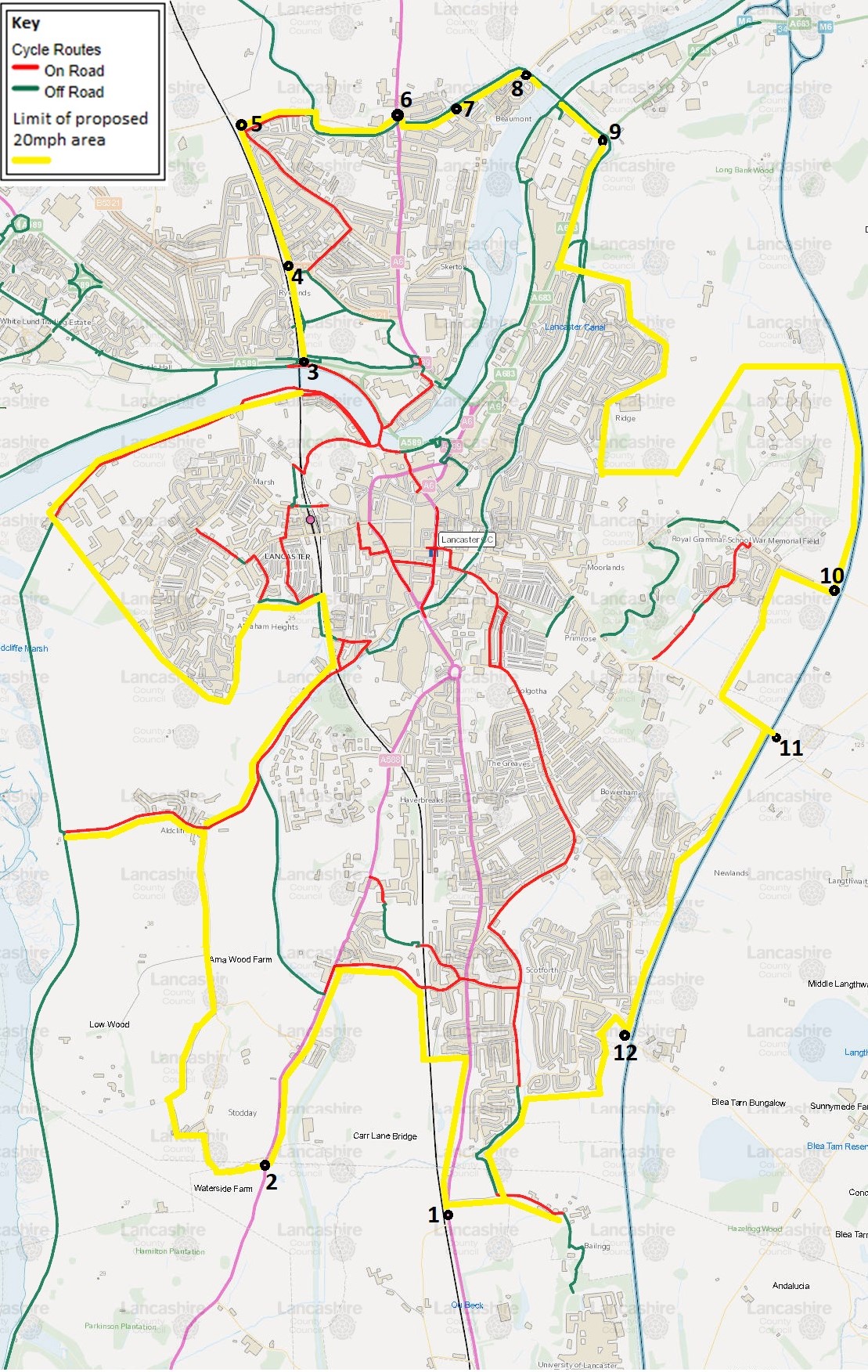 Gina Dowding, as a county councillor, has written to Lancashire County Council calling for a district-wide 20mph speed limit in Lancaster to support recovery from the Covid-19 emergency and provide a legacy of cleaner, safer transport. The proposal includes ALL roads within a mile radius of the centre rather than just residential roads at present.

The scheme, which was drawn up by City Councillor Paul Stubbins and has the support of all Green councillors, follows on from central government's announcement last week that it wants to see local authorities re-allocate road space for cyclists and pedestrians to encourage the social distance which is still needed as lockdown eases and not to overwhelm public transport. Under new temporary guidance, it is possible to implement a blanket speed reduction in urban areas almost immediately.

"It gives an ambience of calmness if you've got cars going at 20mph – it's not as safe and effective as having segregated cycle lanes, but it will be a good start in the right direction," said Gina.

"We know it could work, particularly in Lancaster, where we have one of the worst congestion problems and where air pollution has been a big problem for many years – and we know we've got quite a lot of potential cyclists here.

"There are lots of areas wanting detailed schemes and they will be necessary – but let's look at the speed limit first,"

The proposal has been sent to city councillors from all parties to ask for their support in this.

Other measures to encourage safe movement while maintaining distance

Gina had earlier pressed the County Council for specific improvements for pedestrians and cyclists to encourage continuing active travel.

She said, "One of the few unintended positives of the restrictions in place has been the increased number of people cycling and walking, including families with children, for exercise.

"Also many people including key workers and shoppers who would otherwise use public transport are cycling or walking to work or shop.

"This is great for health and for the environment, and air quality is demonstrably much improved, but we have seen just how limited public space is for pedestrians and cyclists in some areas.

"People are sometimes having to ride further out into the roads to give safe space to pedestrians; and with less traffic on the roads, many cars are travelling much faster."

Gina presented an initial list of proposals to the County Council for pop-up cycle lanes and widened pavements, based on a map drawn up by local cyclists.  This includes: