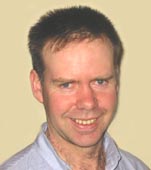 Jon Barry lives on Willow Lane on the Marsh. He is a founder member and trustee of the Marsh Community Centre and has been responsible for much of the fundraising to build and run the centre. He also works closely with the Fairifeld Association and has a particular interest in the Fairfield Orchard and the proposed Fairfield Urban Nature Reserve. He works part-time as a statistical advisor to Government fisheries scientists. In his spare time he enjoys working on his allotment in Fairfield and training for cycling time trials in the summer. He shares a (very hairy) dog with his partner Gill.